To advance the current project model the Company has acquired six new blocks of claims and has further assessed the historic sampling of known graphite exposure on ground currently held. The review isolated a number of high priority targets, some of which have returned high grade samples during previous work by the SOQUEM – QUINTO joint venture, Esbec, Mason Graphite, and Focus Graphite. Concurrent with the acquisition, an ongoing field sampling campaign will immediately sample selected areas of the newly acquired tenement.

The newly acquired land title comprises six (6) selected groups of claims consisting of 58 claims covering 3,116Ha. Berkwood holds a 100% interest in the properties, following their acquisition from 1215616 BC Ltd., a Company held by Contigo Resources Ltd (“Contigo”) and Graeme Sewell (“Sewell”, together, “the Vendors”). These six groups of claims occur either directly adjacent to or within a few kilometers of Berkwood’s existing claims, and each has either known graphite showings or geological extensions of known graphite bearing formations over which geophysical conductive anomalies have been surveyed.

The ongoing sampling and shallow geophysics program will focus on high priority targets on the newly acquired claim blocks with immediate effect. Among the targets is Zone 06, where previously reported surface samples of high grade graphite (maximum of 41.1% Cgr in a single sample) were recorded by previous workers. The target zone locations being prospected are ranked on the strength of airborne geophysical anomalies (2003 regional GeoTEM time domain EM survey and 2012 airborne magnetics flown by government), proximity to the core Zone 1 project, and ease of access to each location.

The current program accesses the projects using existing roads and forest trails, and excludes further access development as part of the present program.

Lac Guéret South is located in Cote Nord, Quebec, a three hour drive from Baie-Comeau in an area of very good infrastructure. The Project directly borders Mason Graphite’s (TSX-LLG) advanced Lac Guéret Project to the South. With a market capitalisation of over $40 million Mason owns one of the largest high grade graphite deposits in the world and is planning on building a new graphite mine and processing plant.

Two distinct electromagnetic conductors appear to occur over a two kilometer length and 50 meters to 600 meters in width as defined by airborne EM geophysics (see the Berkwood news release dated February 10, 2015). The western part of this zone was further defined by ground VLF and EM surveys: four VLF and 22 contiguous PhiSpy EM conductors have been detected over an apparent 800 meters length and up to a 300 meters width. This western area is now recognised to comprise a significant graphite zone interlayered within the hinge of a complex fold. The apparent fold limbs thin to some 50 meters in width further to the east.

Four separate drill programs have been executed on the western extent of Berkwood’s Zone 1 Graphite Body for a total of 45 holes and 6,091.7 m completed between August 2017 and December 2018. One hole of 6.1 m was incorrectly collared and did not intersect graphite. The Company intersected visual Graphite in every other hole drilled (44), with significant Cgr (Carbon as graphite) intercepts being observed in 41 holes. These programs have provided the data and assays for completion and announcement of an in-pit constrained resource totalling 1,755,300 tonnes of indicated resources at 17.00 % Cgr and 1,526,400 tonnes in inferred resources at 16.39 % Cgr (refer NR of June 16th, 2019).

Tom Yingling, President and CEO states, “Berkwood is in the process of demonstrating a viable conceptual hub resource location at its Zone 1, Lac Guéret South prospect location. The coarse nature of the naturally occurring graphite, and the compelling reported resource, has stimulated our determination to rapidly locate and evaluate certain nearby zones of Zone 1 lookalike graphite occurrences. By acquiring property which hosts additional known surface-exposed graphite proximal to our existing ground, we substantially increase the number of prospects that could support our hub-and-spoke mining feed model, which envisions an integrated graphite production scenario that depends upon shallow production from multiple podiform deposits. The model offers maximum optionality in production scheduling and extended resource life to build upon our recently reported Zone 1 resource.”

Edward Lyons PGeo (BC, QC, NL) is a Qualified Person under the definition of Canadian National Instrument 43-101, and has approved the technical information in this news release. Ed has worked extensively on the Lac Guéret Property, now owned by Mason, and neighbouring graphite properties since 2000.

About the Company:  Berkwood is engaged in exploration for the commodities that enable the modern revolution in essential technologies. These technologies are dependent upon the ethical mining and supply of naturally occurring elements and minerals that enhance the performance of energy storage systems and permit the development and miniaturization of new electronics and structural components for the new suite of innovative tools.  The Company is led by a team with collectively over 100 years experience and whose members have been involved with the discovery of several producing mines. 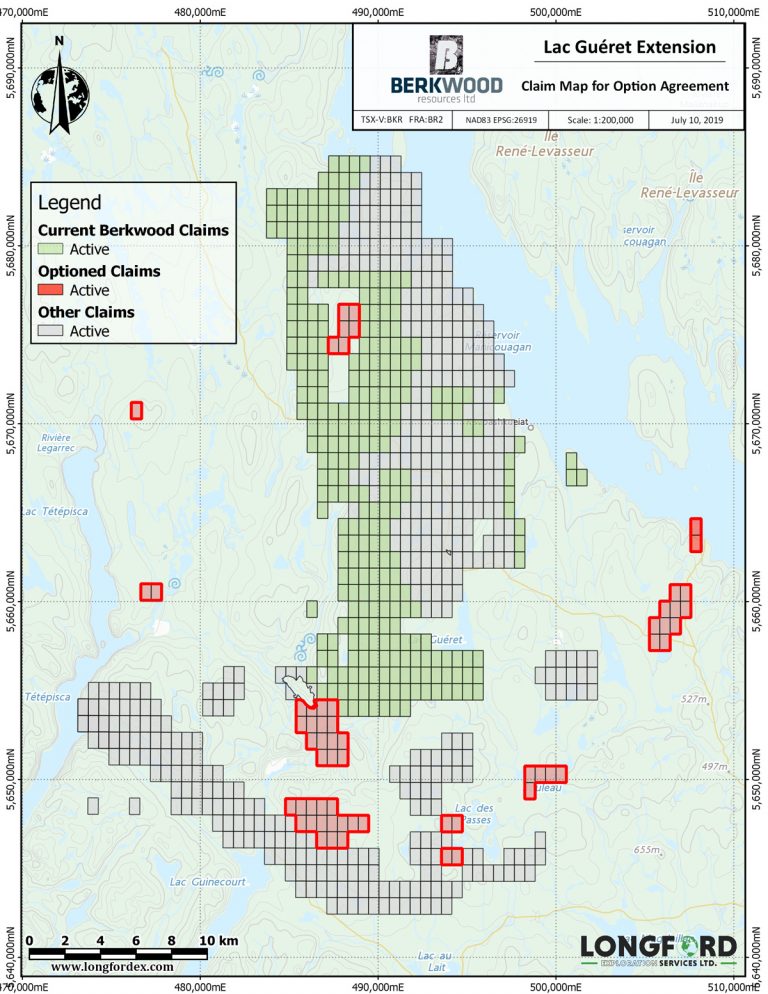