February 7, 2019, VANCOUVER, B.C. – Berkwood Resources Ltd. (TSX-V: BKR, FSE: BK2, WKN: A110N3) (“Berkwood” or the “Company”) is pleased to announce that it has received exceptional, positive test results from initial metallurgical testing undertaken to evaluate whether the Lac Guéret South deposit is amenable to processing for the ready separation of graphite from the host rock.  The work was carried out on two composite samples, each typical of a principal mineralogical association in the graphite bearing geological formations of the Gagnon Group.  Metallurgical tests have demonstrated two highly desirable and advantageous features in the graphite concentrates produced. The first advantage is the high abundance of coarse graphite flakes recovered intact, and the second is high graphitic carbon grade of the concentrate produced.

Tom Yingling President and CEO states, “We are very happy with the superb results from our metallurgical test work. We now have confirmed that we can produce highest-grade graphite concentrates containing a high percentage of large flake product. With these positive metallurgical results, I now look forward to integrating our recently completed fourth drill program data into our geologic model: this work is expected to underpin an evaluation of requirements for the preparation of a mineral resource estimate for publication. Berkwood is fully funded to complete the required resource model, including any requirement for further drilling.”

Berkwood’s metallurgy program is being overseen by Technical Team Member Mr. Michel Robert, B.A., B.A.Sc (Hons), M.A.Sc (Hons). Michel is a metallurgist and mining engineer with over 40 years of diverse technical management experience in the mining industry, from production foreman through president for various companies involved in the base and precious metals, industrial minerals, iron ore and niobium sectors.

As Senior Vice President for Pan American Silver Corp. from 1995 to 2001, Michel managed operations in Latin America and was responsible for the identification, purchase and turnaround of numerous mines still running today.

Of significance to Berkwood’s Lac Guéret South Project is the fact that Michel was cofounder, developer and metallurgist involved in the early stages of Quinto Exploration’s Graphite discovery now being put into production by Mason Graphite (TSX-LLG). Berkwood’s Lac Guéret South Graphite Project is located eight kilometers south of Mason Graphite’s project and shares an analogous geological environment, in an area where graphitic horizons range up to 40% Cgr (averaging 20.4% at Mason Graphite’s Lac Guéret Deposit) and flakes of up to 5 mm in diameter are exhibited. Large flake graphite is considered to be represented by flakes 0.3 mm in diameter and above.

Michel Robert states, “Even when compared against a global suite of Graphite prospects, projects and mines, it is extremely rare to see graphite concentrates that are readily processed to yield both an abundance of large flakes AND high graphitic carbon grade. Berkwood’s initial Graphite process samples have, to date, delivered on both these highly desirable and therefore potentially valuable characteristics.”

Samples from our test, ready to be shipped to potential off take and project development partners

Based on experience on similar projects gained by the professional team involved, it has been possible to achieve significant early confirmation of excellent indicative metallurgical characteristics featuring high recoveries of Cgr into concentrates of unusually high grade. The work was carried out on two composite samples together comprising about 400 kg of material from 41 samples taken from six drill holes. In total, thirty-six tests were carried out, including bulk tests, to perform either calibration steps in the process design, or to run the complete chain of selected processes. The process developed involves coarse grinding to nominal 20 US mesh (840 microns), classification, rougher-cleaner flotation, and gravity separation polishing. Flotation reagents conditions were chosen to assure consistent results and simplicity. The procedure was then tested on a 45 kg sample to produce concentrate samples for potential off-takers.

Two definite advantages of the graphite concentrates produced are a preponderance of coarse flakes and high graphitic carbon grade as shown in the following table giving the results of the final bulk test.  Although test results are early stage, Berkwood’s results are very promising, and compare favourably with similar published industry information, including projects that have been subject to substantial process optimisation. 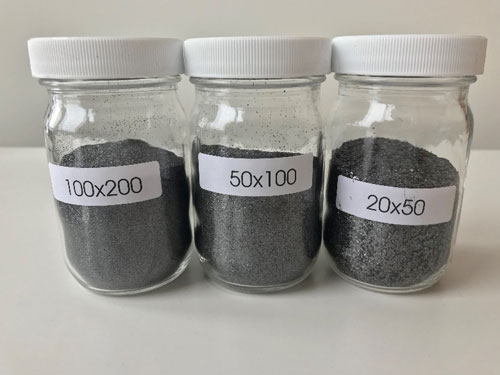 The results presented in this News Release provide the Berkwood Management with the confidence to continue to drive the Lac Gueret Extension project forward with increased focus and dedication. The Company anticipates receiving grade assay results from its Phase 4 drill program (completed late December 2018) in the course of Q1, 2019 (refer News Release of Jan. 16, 2018 “Berkwood Discovers 3 Large Graphite Outcrops and Completes Phase 4 drilling”).

Edward Lyons PGeo (BC, QC, NL) is a Qualified Person under the definition of Canadian National Instrument 43-101, and has approved the technical information in this news release.  Ed has worked extensively on the Lac Gueret Property, now owned by Mason, and neighbouring graphite properties since 2000.

About the Company:  Berkwood is engaged in exploration for the commodities that enable the modern revolution in essential technologies. These technologies are dependent upon the ethical mining and supply of naturally occurring elements and minerals that enhance the performance of energy storage systems and permit the development and miniaturization of new electronics and structural components for the new suite of innovative tools.  The Company is led by a team with collectively over 200 years experience and whose members have been involved with the discovery of several producing mines.

On Behalf of the Board of Directors
Berkwood Resources Ltd.