May 2, 2018, VANCOUVER, B.C. Berkwood Resources Ltd. (TSX-V: BKR, FSE: BK2, WKN: A110N3) (“Berkwood” or the “Company”) is pleased to announce the assay results from the Phase 3 drilling program on the Zone 1 Graphite Body at the Company’s 100% owned Lac Gueret South Project. A total of nine HQ diamond drill holes were drilled in the Phase 3 drill program with every hole intersecting visible Graphite (as per the news release dated April 26th, 2018). Of the nine holes drilled, eight of them intersected significant mineralization with one hole having 17.37% Cgr over 130.55m with a true thickness of 87.5m. As per the table below Graphite assay grades have been returned as high as 33.88%. This combined with BK1-15-17 from Phase 1 drilling of 72.10m at 13.64% Cgr and multiple other wide intersections indicates a large unique discovery.

Three separate drill programs have been executed on Berkwood’s  Zone 1 Graphite Body for a total of over 4,000m completed. All 27 holes have mineralization and 26 holes of these have intersected significant graphite. These intercepts support an evolving structural model of multiple recumbently folded horizon(s) hosting thicker and more consistent graphitic intervals of high grade and wide true thicknesses that suggests strong continuity in the system. On our airborne EM anomaly (see attached map), we have drilled an area about 300m by 300m, leaving an large anomalous area that is still as yet untested by drilling..

The inclined holes were drilled to maximum lengths of about 190 meters. The graphite lies near surface to open-pit mineable depths similar to the depths drilled by Mason Graphite for its planned open pit development.

Edward Lyons, PGeo (BC, QC, NL) states, “With the 130m intercept near surface and a length-weighted composite grade of 17.37% Cgr, the Phase 3 drill program represents a success. The importance of the thinner intersections is that they can mark the edges of thicker beds of graphite. Industry and metallurgical experience in highly metamorphic graphitic rocks has shown that the medium and lower graphite grade material can yield higher percentages of coarse flake graphite recovery, making these units potentially of similar economic value. The true widths and persistence of graphite in almost all of Berkwood’s drill holes to date show the potential of the Zone 1 anomaly.”

The discovery is eight kilometers southwest of Mason Graphite’s deposit, which has an NI 43-101 Feasibility Study. We share a similar structure with one of the highest grade graphite deposits in the world. Mason is concluding its permitting process to start development in 2018. This benefits Berkwood’s project as all the infrastructure is, or should be in place, once our neighbour goes into production.

Tom Yingling, President and CEO, notes that the increasing demand for graphite is reflected in part by the following: 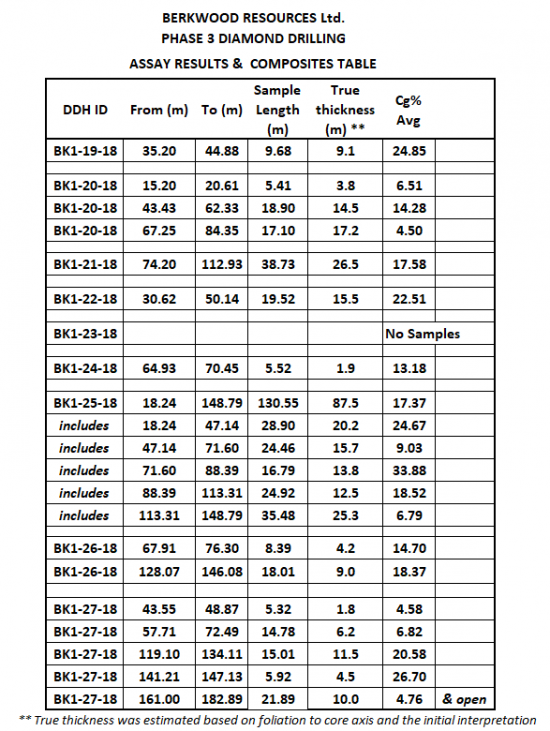 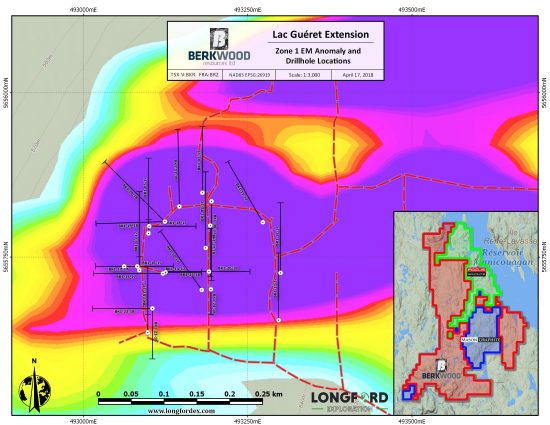 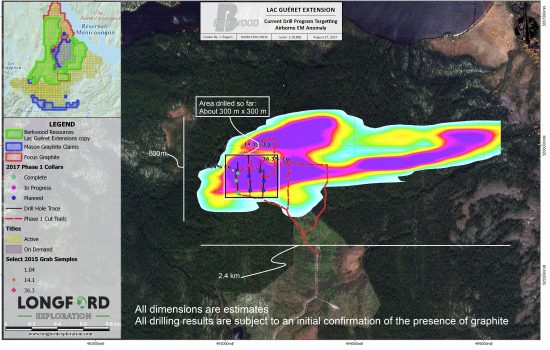 BK1-23-18 was drilled across the margin of the anomaly to test the limits of graphite mineralisation. No graphite was encountered. Deposit definition will require some tests of the margins in order for us to design a more efficiently drill program. This is typical exploration testing.

Lac Gueret South is located in Cote Nord, Quebec, a three-hour drive from Baie-Comeau in an area with very good infrastructure. The Project lies directly south of Mason Graphite’s (TSX-LLG) advanced Lac Gueret Project. Mason is developing one of the largest medium to high-grade graphite deposits in the world.

Including the Phase 3 campaign, the Company has drilled 27 holes on Zone 1 that totals 4,006m. The Company is pleased to announce it has intersected visual Graphite in every hole drilled to date, with significant Cgrr intercepts being observed in 26 holes. Success in these drill programs confirms that a significant component of the distinct electromagnetic conductors that occur over a two kilometer strike length and 50 meters to 600 meters in width as defined by airborne EM geophysics (see the Berkwood news release dated February 10, 2015) includes graphite mineralization.

To view a virtual reality video of the autumn Phase 1 Zone 1 drill program as well as the most recent winter Phase 2 drill program, please follow the link at the bottom of our home page at: http://www.berkwoodresources.com .

Edward Lyons PGeo (BC, QC, NL) is a Qualified Person under the definition of Canadian National Instrument 43-101, and has approved the technical information in this news release. Ed has worked extensively on the Lac Gueret Property, now owned by Mason, and neighbouring graphite properties since 2000.

About the Company: Berkwood is engaged in exploration for the commodities that enable the modern revolution in essential technologies. These technologies are dependent upon the ethical mining and supply of naturally occurring elements and minerals that enhance the performance of energy storage systems and permit the development and miniaturization of new electronics and structural components for the new suite of innovative tools.  The Company is led by a team with collectively over 100 years experience and whose members have been involved with the discovery of several producing mines.