The assay results represent samples from sixty four (64) one-meter channel samples collected from seven sawn channels at Zone 6, and 55 grab samples collected at Zones 1, 3, 4, 5, 6, 7 and 9. Although multiple grabs and blocks of interest are found in the different zones, Zone 6 showed the most potential as multiple channels sampled from the same area show high grade mineralization. Grab samples are selective in nature and are not representative of the mineralization hosted on the Property. Notable results are listed in Table 1.

Mr Thomas Yingling, CEO, stated: “We are elated at the results returned by the initial grab and channel sampling from Zone 6: these data justify a trench and drill program at Zone 6, which is now a very strong candidate for inclusion in our hub and spoke graphite production model. Results from four other Zones also motivate for mechanical trenching, and the Zone 1 result confirms our thesis that there remains substantial potential along strike upside at the Zone 1 resource location of at least 500m.”

The recent exploration program accessed the first round of targets using existing roads and forest trails. The work was led by Quebec based teams. Channel sampling and prospecting work were supervised by David Fafard P.Geo OGQ1814 and Steven Lauzier, P.Geo OGQ1430.

The Zone 3 sampling targeted an historic conductor suggestive of a broadly folded graphitic unit, and historic drilling that reported 22m @ 20.1% Cg from 4.4m depth downhole. The 2019 campaign confirmed graphite in the area and the Zone remains a mechanical trenching target for the Company.

The Zone 4 sampling was unsuccessful in locating the prime target under surficial cover, though a mineralized float sample was found and assayed.

The Zone 5 prospecting effort located historically reported outcrop, where Cg above 20% was reported. Further outcrop was not located and the zone is targeted for mechanical trenching. The Company was successful in duplicating the historical result in a grab sample that assayed 20.02% Cg.

The Zone 6 was generated from a distinct airborne electromagnetic conductor that appears to extend for over three kilometers, and appears folded at its southernmost extent (as seen in figure 2). Sampling has focussed on the southern end of the feature (6 channels sampled) and an area near the northern extent of the anomaly (2 channels sampled). The two locations are accessible and have shallow cover which will ease future stripping of outcrops.

The channel results on Zone 6 comprise 64 samples collected from saw-cut channel taken approximately perpendicular to the strike of the local schistosity and cleared surfaces located by Beep Mat. The samples comprise the results for eight (8) cut channels, with each sample comprising a 1m interval along each channel. Channels range from 2m to 22m in length. The Cg results range from 0.025% to 42.7% Cg and are shown in Figure 2. Table 2 reflects the best intersection for each channel. A channel sample (BKZ6-19- CH5) was cut at the hinge zone and following further inspection was found to be at a low angle to the graphite layering in the paragneiss. The Company considers this channel as a succession of grab samples taken along the strike of the mineralization which assayed up to 24.7% Cg. The best grab sample at Zone 6 assayed 55.80% Cg. Additional mechanical trenching and drilling at Zone 6 is supported by the results obtained from this 2019 summer program. Figures 2 and 3 illustrate the channel locations and the channel results. 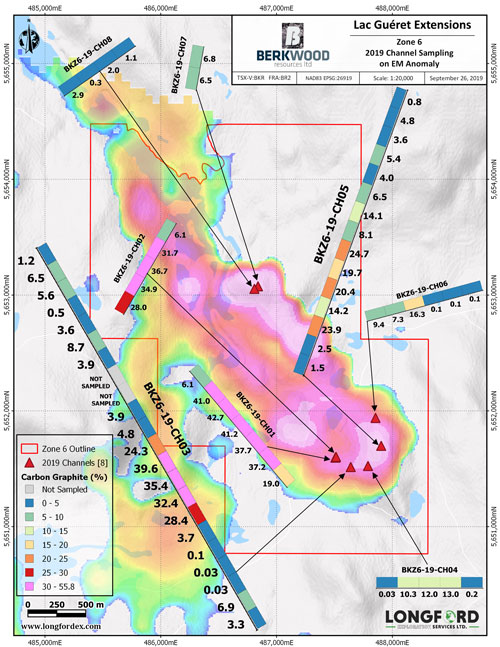 At Zone 7 only a float sample was recovered with poor graphite content, although an historic ‘paragneiss with graphite’ is reported. Zone 7 is not slated for further near-term exploration.

Zone 9 prospecting verified the existence of historic trenching and additional graphitic outcrop was cleared following Beep Mat detection of shallow conductors. Historic trench samples returned in excess of 25% Cg, a result confirmed by the Company with a sample up to 27.8% Cg. The Zone 9 anomaly is scheduled for high priority mechanical trenching.

QA/QC: All samples were submitted to Activation Laboratories of Ancaster, Ontario, a certified laboratory. Following reception, the samples were prepared using crushing and sieving, and were then analysed using method 4F-C-Graphitic (multistage furnace treatment and infrared absorption). Two blank assays were inserted by Activation Laboratories while the Company also included 4 channel sample duplicates.

Qualified Person: Steven Lauzier, P.Geo. OGQ1430 is the Qualified Person as defined by National Instrument 43-101 guidelines, has reviewed and approved the technical content of this news release.

About the Company: Berkwood is engaged in exploration for the commodities that enable the modern revolution in essential technologies. These technologies are dependent upon the ethical mining and supply of naturally occurring elements and minerals that enhance the performance of energy storage systems and permit the development and miniaturization of new electronics and structural components for the new suite of innovative tools. The Company is led by a team with collectively over 100 years experience and whose members have been involved with the discovery of several producing mines.

On Behalf of the Board of Directors
Berkwood Resources Ltd. ‘Thomas Yingling’ President, CEO & Director