VANCOUVER, BRITISH COLUMBIA – Vancouver, British Columbia, | Aug. 26th, 2022 – Green Battery Minerals inc. (the “Company”) (TSX-V: GEM, FSE: BK2P, WKN: A2QENP OTC: GBMIF) is pleased to announce that it has mobilized a drill contractor to commence additional drilling on Zone 6 of it’s 100% owned Berkwood Graphite Project. The program is intended to further define the extent and grade of the Zone 6 graphite discovery and to drill into the outcrops that were exposed in our last mapping program done in July of this year.

The 20-hole 2,000 m 2022 drill program has been designed based on the results of surface exposures of graphite identified during the previous July mapping program (see news release date August 5, 2022). Semi continuous horizons of graphite were identified along the trend illustrated in Figure 1 and Figure 2 and appear to define a recumbent fold structure. Drilling is to initially focus on outcropping areas of graphite. At each of the principal outcrop locations a number of holes will be advanced and will attempt to demonstrate down dip and along-strike continuity. Drilling will commence along 400m of continuous graphite exposure along the south-dipping southern limb of the antiform between Areas 1 – 3 outcrops (Figure 1). Where access is possible, targeted holes will be advanced in the nose of the antiform, where surface mapping has identified fault offset surface continuity into the Area 4 outcrops. Several targeted holes have also been specifically designed to establish the near surface true thickness of the outcropping graphite.

Drilling is expected to commence before the end of August 2022 and is expected to last for 4 to 6 weeks with field operations based out of Manic 5, Quebec. The proposed budget has been approved in the amount of CAD$1,000,000. 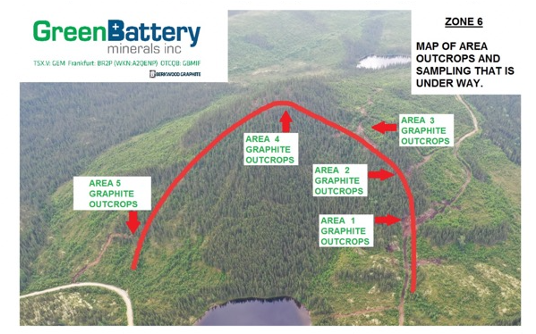 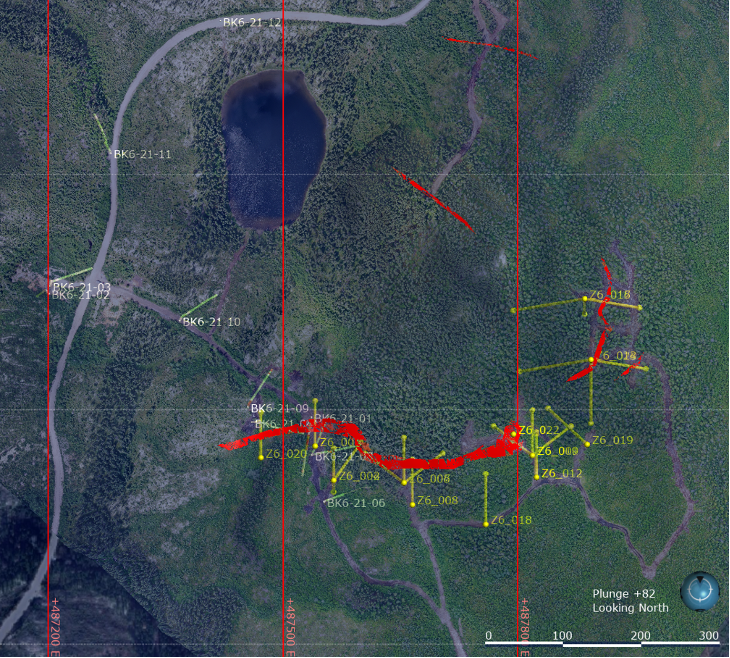 The Company has previously completed a drill program on Zone 6 for a total of 970 meters in 12 drill holes. Six of the twelve drill locations were drilled into outcrops and intersected significant graphite enrichment (see news release date May 6, 2022).

Tom Yingling, President and CEO of Green Battery states “It’s not every day you get to drill into high grade anything and here we are about to drill directly into 4 separate graphite outcrops along a defined 400m strike length with strong indications of more. Needless to say, we are excited to test these outcrops at depth under much fairer conditions than those we encountered last winter.”

About the Berkwood Graphite Project

The Berkwood Graphite Project is located within the jurisdiction of Quebec, in the Manicouagan Regional County Municipality, three hours driving time from the city of Baie-Comeau. Easy access is provided via a major secondary road and numerous tertiary and forest roads that traverse the property.

The Zone 1 deposit lies 8 km southwest of Mason Graphite’s deposit which is the subject of a current feasibility study. The Company believes its Zone 1 deposit and that of Mason share many similar geological characteristics with the Zone 1 deposit being one of the highest-grade graphite deposits in the world.

Qualified Person: Luke van der Meer (P.Geo) is a Qualified Person (“QP”) as defined by National Instrument 43-101 guidelines, and he has reviewed and approved the technical content of this news release.

Certain statements in this document which are not purely historical are forward-looking statements, including any statements regarding beliefs, plans, expectations or intentions regarding the future. Forward looking statements in this news release include that the Company will carry out the drill program described in this news release, conduct the Offering and expend funds on Berkwood Graphite Project exploration. It is important to note that the Company’s actual business outcomes and exploration results could differ materially from those in such forward-looking statements. Risks and uncertainties include that further permits may not be granted timely or at all; the mineral claims may prove to be unworthy of further expenditure; there may not be an economic mineral resource; methods we thought would be effective may not prove to be in practice or on our claims; economic, competitive, governmental, environmental and technological factors may affect the Company’s operations, markets, products and prices; our specific plans and timing drilling, field work and other plans may change; we may not have access to or be able to develop any minerals because of cost factors, type of terrain, or availability of equipment and technology; and we may also not raise sufficient funds to carry out our plans. Additional risk factors are discussed in the section entitled “Risk Factors” in the Company’s Management Discussion and Analysis for its recently completed fiscal period, which is available under Company’s SEDAR profile at www.sedar.com. No assurance can be given that any of the events anticipated by the forward-looking statements will occur or, if they do occur, what benefits the Company will obtain from them. These forward-looking statements reflect management’s current views and are based on certain expectations, estimates and assumptions, which may prove to be incorrect. Except as required by law, we will not update these forward-looking statement risk factors.